The party has no vision for the country - Kambulire 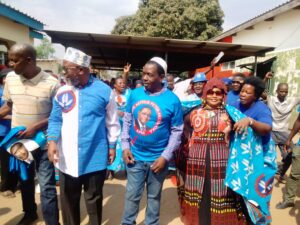 A veteran politician Ben Kambulire has told Angaliba that UTM which is headed by vice president of Malawi Dr Saulosi Chilima is no longer having visions for the country and people should not be cheated.

Kambulire said this after a press briefing held in Mangochi district where among other things he announced that he has joined DPP.

On his part Regional Governor of DPP Emran Mtenje who welcomed Kambulire said that the politician has made a good decision.He added that DPP is the only political party in the country which is capable to develop Malawi.

Ben Kambulire was a national executive member for UTM.