The visit is timely and beneficial 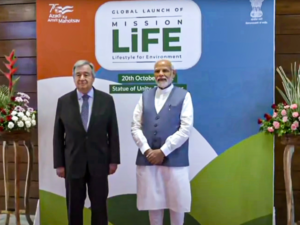 United Nations Secretary-General Antonio Guterres on his 3 days visit to India has met Indian Prime Minister Narendra Modi and held bilateral talks in western Kevadia town on Thursday (October 20).
Guterres, met Modi at the Statue of Unity, the world’s tallest statue to discuss several issues between India and the UN.

The statue of independence hero Vallabhbhai Patel towers is nearly twice the height of New York’s Statue of Liberty is 182-metre (597-ft) tall.

PM Modi and the UN chief will later launch Mission LiFE (Lifestyle for Environment), which aims at a three-pronged strategy for changing people’s collective approach towards sustainability.

Guterres will also visit Modhera, which was recently declared as the country’s first 24×7 solar-powered village, and interact with women from the village.