Claims life of a woman and injured several others... 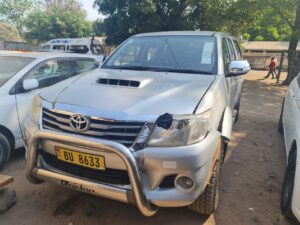 The vehicle which was involved in an accident

Blantyre west constituency member of parliament Jason Kaneka has been involved in a road accident as he was driving a Toyota Hilux registration number BU8633 to Mangochi Boma from Liwonde.

Public relations officer for Mangochi Police station sub Inspector Amina Tepani Daudi confirmed to Angaliba about the incident and says this happened on the night of October 23 2022 at
Likala village along Arthur Peter Munthalika Highway.

The deceased has been identified as Jenet Musabyimana,a A 36-year old Rwandese businesswoman.

Due to overspeeding, Kaneka lost control of the motor vehicle and swerved to the nearside of the road where he hit six people who were chatting near side of the road.Following the impact, Musabyimana sustained severe head injuries and was rushed to Mangochi District Hospital where she died while receiving treatment.

The other five escaped with minor injuries and were treated as outpatients at the same hospital.

Daudi advised the public to stop the tendency of playing, chatting and sitting on the road.