A young boy aged 8 identified as Patrick Matias has died after a motor vehicle airbag mortar exploded onto his face.

The tragedy occurred on the night of October 24, 2022 at Saiti Kadzuwa Village, Traditional Authority Mponda in Mangochi. 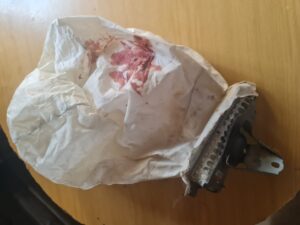 According to Daudi ,Matias and his friends on the evening of that day went to a nearby garage to collect metal scrap where he sneaked out with the motor vehicle airbag.”

“While at home around 20:00hrs, Matias started playing with the airbag inside the house and he accidentally removed the firing pin which prompted the mortar to explode onto his face.”

Due to the explosion, the minor sustained a deep cut wound on the left side of the forehead exposing the brain.

His parents rushed him to Mangochi District Hospital where he died while receiving treatment.Postmortem revealed that he died due to head injuries.

Meanwhile police in the district are advising the public to refrain from picking or playing with equipments which they are not aware of their usage to avoid similar accidents.